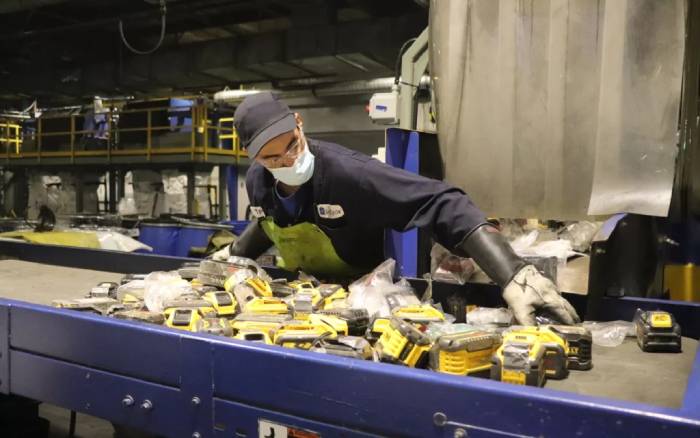 Li-Cycle said the growth in revenues – 29x higher than the same quarter the previous year – was driven by increases in product sales volume and metal-based prices. Its operating expenses increased to US$30 million, six times higher than the US$5.6 million in the same period last year.

The company recycles lithium-ion batteries from both EVs and energy storage and its two-step process can achieve a 95% recovery rate. It recently opened its third recycling facility, in Arizona, its third ‘Spoke’ facility. Spoke facilities process battery scrap and end-of-life batteries before sending the resulting black mass to a recycling hub in New York, set to come online in 2023, which will refine it into the different critical materials which can then be used in lithium-ion battery production.

The company expects the energy storage system (ESS) sector to be a major contributor both for providing materials but also for offtaking recycled materials Li-Cycle produces.

During its most recent quarter, the company entered into long-term agreements with LG and Glencore to be their preferred lithium-ion battery recycling partner. The two companies will provide feedstock and scrap to Li-Cycle’s hubs while Glencore will provide black mass and sulfuric acid for its hub once open. Both LG and Glencore will have also signed offtake agreements for some of Li-Cycle’s battery-grade products produced at the Rochester hub.

“Strategically, we are positioning Li-Cycle as a leading and preferred recycler and supplier of critical battery materials, capitalizing on the significant secular growth trends.”

Li-Cycle, which went public on the New York Stock Exchange in August last year through a SPAC merger, finished its second quarter with US$509.3 million cash in hand. That rises to US$760 million on a pro-forma basis including the investments totalling US$250 million from LG and Glencore as part of those deals.

The company plans to open spoke facilities in Europe – Norway and Germany – in the first half of 2023, and by the end of that year anticipates having an annual recycling capacity of 65,000 tonnes. Based on figures previously provided to Energy-Storage.news by Kunal Phalpher, Li-Cycle CCO, that 65,00 tonnes equates to material from approximately 13GWh of batteries.