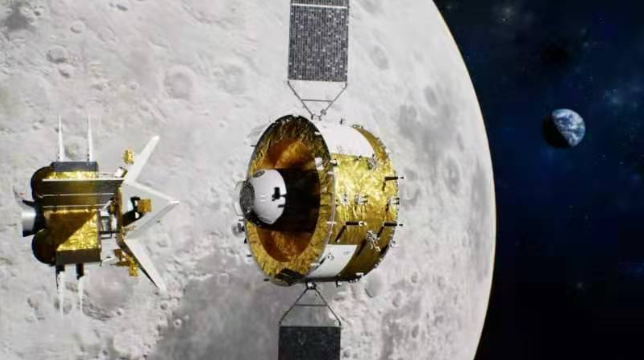 The Chang'e-5 mission includes 11 stages of carrier launch, earth-moon transfer, near-moon braking, orbiting around the moon, lunar descent, lunar work, lunar ascent, rendezvous and docking, round-moon waiting, lunar-earth transfer, and re-entry recovery. , Lander, ascender, orbiter, and returner have a variety of combinations and separation methods in the flight state. How the power supply can best adapt to the multiple states of multiple aircraft and multiple flight stages, the developers have carried out changes.

The power controller is the "brain" of the detector's power system. In order to solve the problem of energy shortage and limited weight resources during the flight of the Chang'e-5 quadruple, the controller has undergone an upgrade from PCU to PCDU.

"From PCU to PCDU, it is the upgrade from single function to multi-function. In the Chang'e-3 and Chang'e-4 missions, the power controller only includes power regulation modules, while Chang'e-5 focuses on power regulation modules, power distribution modules, Several functions such as pyrotechnics control module and intelligent interface unit, this is the first application of the lunar exploration project," said Zheng Lei, chief designer of Chang'e 5 power supply product.

In the stand-alone unit, it has also undergone a radical change. After referring to the relevant foreign technical materials and weighing the relevant pros and cons, the developers boldly challenged. The domestic first multiple highly integrated technologies, so that the power controller specific power reaches the highest domestic and international Leading level, achieving a leapfrog improvement in performance.

Xu Zefeng, head of Chang'e 5 power supply product technology, said, “In response to the original low-integration density of circuit boards, we have conducted many tests and abandoned the in-line process commonly used in domestic satellite models at that time, and adopted large-scale surface mount for the first time. This is the first time to lead the application of this technology in other subsequent models. At the same time, the innovative use of signal mother board, printed board current technology and bus bar optimization among the modules has achieved a high degree of integration of module cables. , Greatly reducing the volume and weight.” Through the comparison with the Chang'e-3 product, it can be seen that the original frontal in-line process has been replaced with double-sided patch, and the circuit board integration density is greatly improved; the original densely packed The circuit board of the wires is now neatly distributed with a few clear lines, and the product density has been improved; and the number of single modules has been successfully reduced from the original 5 to 2, and the volume has reached the volume of the Chang'e-3 controller. 1/3 of it. For these technologies, more than 20 patents were authorized in the follow-up.

After taking full account of the mission time on the lunar surface and the working mode of the power supply products, according to the overall plan, the developers optimized the energy design of the lander and ascender assembly. Xu Zefeng said, “The power products of the lander include solar battery arrays and power controllers, and the power products of the ascender include solar battery arrays, power controllers and lithium-ion batteries. Before separation, during the flight phase and the lunar phase, the landing The solar battery circuit of the solar cell assumes the responsibility of supplying power to the assembly; and when the assembly separates in the lunar phase, the ascender quickly changes its role, and the solar battery circuit powers itself during the illuminated period. In the non-illuminated period, it lands. The device and the riser share a set of lithium-ion batteries, which provide power to the assembly."

Boost the ultimate goal of "wandering, falling, and returning" of the four devices

In the lunar exploration mission, the energy required by the probe is much more tight than that of traditional satellites. Chang'e-5 is designed as a four-device combination, and it needs to complete the three goals of "around, fall, and return" at one time. The energy required is more than any lunar exploration and deep space exploration mission in my country. Therefore, improving the energy supply capacity of solar cell arrays and lithium-ion battery packs is an important issue that developers need to solve.

However, during the lunar exploration mission, the area of solar panels is severely restricted. At the same time, unlike ordinary satellites, the configuration of the probe determines the irregular shape of the panels. The solar panels of Chang'e-5 have triangles and polygons. And many other shapes. What should I do if the substrate area is small and oddly shaped?

"For the general satellite model, we only use a single size solar cell when designing the solar cell circuit. For Chang'e-5, we broke the conventional thinking and used multiple sizes of cells to mix the fabrics, so that the fabric efficiency reached 91% or more. This is 5%-10% higher than conventional products. At the same time, the highest efficiency solar cells must be selected. The photoelectric conversion efficiency of the solar cells of Chang'e-3 and Chang'e-4 are 28.6% and 30.84%, respectively, and Chang'e-5 has reached 31% or more". Through unremitting efforts, the output power per unit area of the Chang'e-5 solar panel is not only at the time of product development, but even now, it is the highest level in China.

Specific energy is a major performance index of lithium-ion batteries. The higher the value, the more energy can be stored per unit volume or weight. At the beginning of the research, the highest specific energy of domestic lithium-ion battery cells was 155Wh/kg, and the highest internationally was 165Wh/kg. In view of the short service life and high depth of discharge of Chang'e-5 lithium-ion battery products, the developers carefully analyzed the feasibility of technical indicators, consulted a large number of documents, and investigated the technical data of lithium battery companies, and formulated a solution. . "We selected lithium cobalt oxide cathode materials and graphite anode materials with higher specific energy, selected high molecular weight binder materials to reduce the amount of binder, and optimized the pole piece formula to increase the content of active materials", Chang'e No. 5 Lithium Said Wang Xiaorui, the designer in charge of ion battery. An understatement, behind a large number of process tests, new electrode materials, new material ratios, and completely different physical and chemical parameters from the past have caused great changes in the process of mixing powder, pulping and other processes. A footprint has verified every process in a down-to-earth manner. After 8 months of hard work, they increased the weight ratio of the battery to 195Wh/kg. This value is currently the highest value of specific energy for lithium-ion batteries used in aerospace.

At present, the GREPOW low-temperature lithium battery series can also be used in the aerospace field. There are two types of batteries: lipo and lithium iron phosphate. 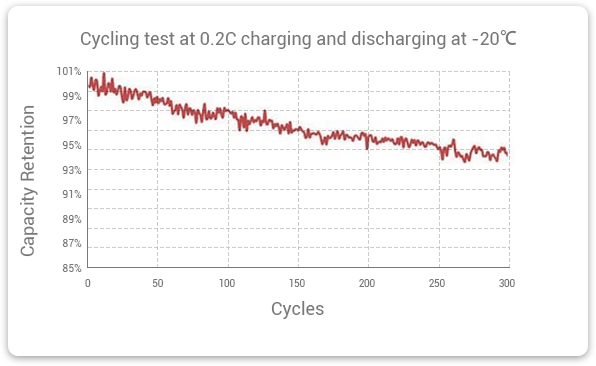 This cycle test shows how Grepow’s low-temperature LiFePO4 batteries still have more than 93% capacity retention even after 300 cycles at 0.2C and -20℃.