Moreover, owing to the intrinsically hydrophobic properties of the polymer separator, it is hard for the polymer separator to infiltrate and hold the non-aqueous electrolyte, which limits the rate performance of the battery, thus adversely affecting the application of the lithium-ion battery for the electric vehicle and hybrid-electric vehicle. The organic-inorganic composite separator has been developed, but there are still issues of the poor thermal stability, poor ionic conductivity.

Because of its insulating property, good thermal stability and excellent electrolyte retention capacity, the porous inorganic membrane has been taken into account as lithium-ion battery separator for the first time. This dissertation is focused on lithium-ion battery system, and aim at improving the safety performance and rate capability of the battery. The porous Al2O3, SiO2, and AAO separators have been prepared. 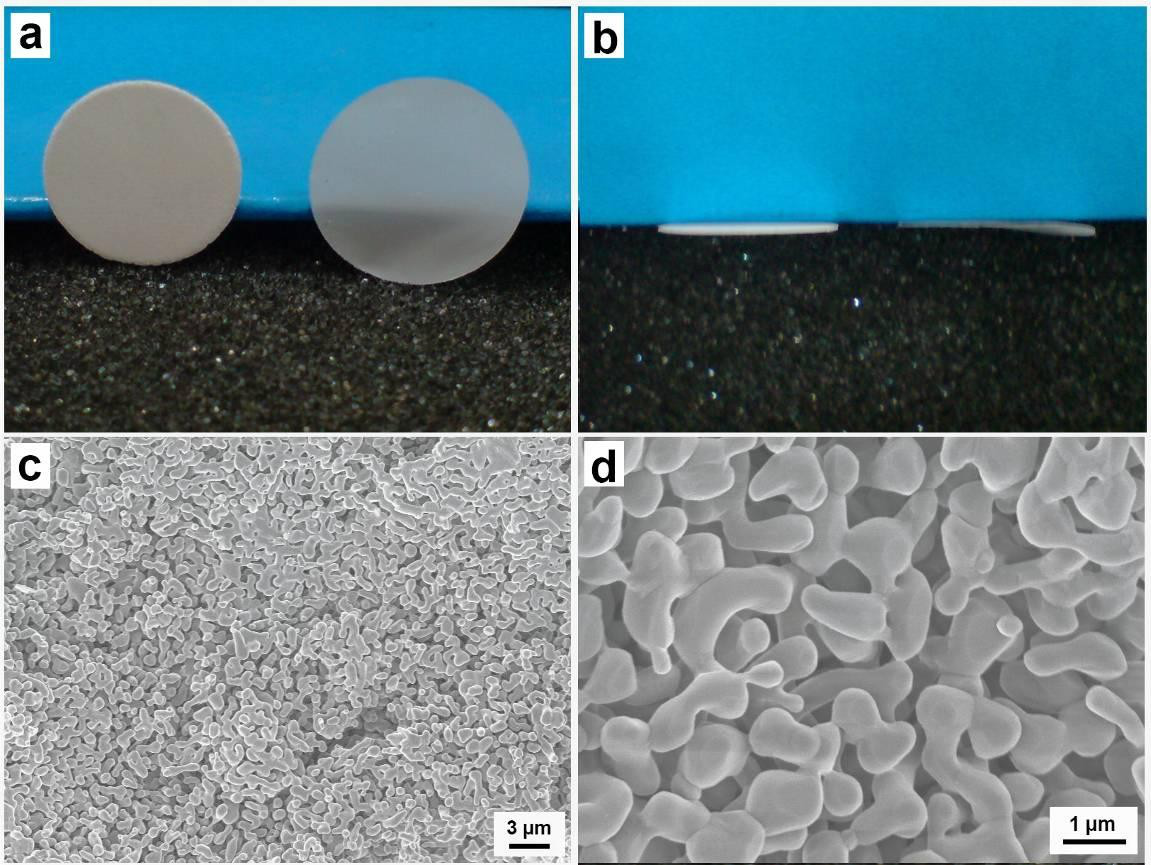 Photographs (a and b) and SEM images (c and d) of the Al2O3 inorganic separator, compared with the commercial polymer separator.

The technique of SEM is adopted to characterize the microstructure and morphology of the as-prepared membranes. The electrochemical methods including Galvano statically charged and discharged test, cyclic voltammetry, and impedance measurement was used to systematically investigate their electrochemical performances.

Thus, the porous Al2O3 can be used as a lithium-ion battery separator. All the evidence indicate that the inorganic separator is very promising to be applied in the large-sized lithium-ion batteries, especially for the long-term energy storage systems.

Secondly, the porous SiO2 separator with good mechanical strength has been prepared by sintering the commercialized raw materials of SiO2 which is cheap and easy to get. The electrolyte-inltrated SiO2 separator exhibits excellent ionic conductivity even at as low as -20 °C and much better electrolyte retention performance than polymer at 50 °C.

Photographs (a) and SEM images (b) of the SiO2 separator, compared with the commercial polymer separator.

The excellent electrochemical performance of the SiO2 separator can be attributed to the following reasons:

(2) the capillary force of the porous pores in the SiO2 separator;

(3) SiO2 can capture the trace amounts of moisture and acidic impurity in the electrolyte.

All these results indicate that the SiO2 separator is very promising to be applied in the lithium-ion batteries, especially for the long-term energy storage systems.

Thirdly, through-hole anodic aluminum oxide (AAO) film has been quickly and efficiently prepared within a simple homemade device. The AAO film has a high porosity of 72% and good mechanical strength even as thin as 60 μm. The AAO film has excellent performances in electrolyte uptake and retention, and the wettability of the electrolyte to the hydrophilic AAO film is much better than that of the commercialized polymer separator. Compared with the polymer separator, the LiFePO4/graphite cell using the AAO separator shows better cycling capacity, rate capability, and low-temperature performance. The effect of the AAO separator on the performance of LiFePO4/graphite cell has also been investigated by the EIS. It is demonstrated that the AAO separator is very promising to be applied in the lithium-ion batteries. 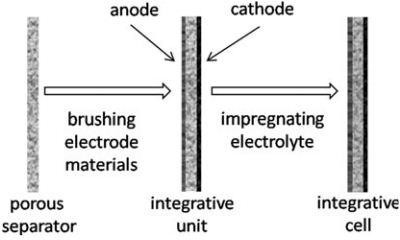 Finally, an integrative cell with a porous Al2O3 membrane as both a support and a separator has been fabricated by coating the electrode materials on each side of the separator, while the electrolyte was in?ltrated inside. The LiFePO4/graphite integrative cells are evaluated in coin-type cells and exhibited good cycle capacity.

The self-standing integrative cell is a simple and promising technology to assemble the battery stacks and meanwhile had an obvious advantage of forming a ?rm structure, which could avoid inner short circuit during being moved or crashed. Such self-standing integrative cell with Al2O3 porous separator could provide a competitive candidate to the currently rolling battery assembly, especially for the large-sized energy storage device.