The Wearable Biofuel Biofuel Cell Using Sweat Has been Developed

A unique new flexible and stretchable device, worn against the skin and capable of producing electrical energy by transforming the compounds present in sweat, was recently developed and patented by CNRS researchers from l"Université Grenoble Alpes and the University of San Diego (U.S.). This novel special cell is already capable of continuously lighting an LED, opening new avenues for the development of wearable electronics powered by autonomous and environmentally friendly biodevices. This research was published in Advanced Functional Materials in September, 2019. 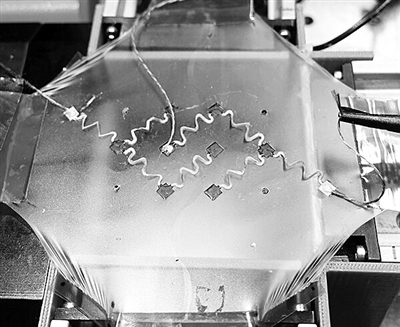 The potential uses for wearable electronic devices continue to increase, especially for medical and athletic monitoring. Such devices require the development of a reliable and efficient energy source that can easily be integrated into the human body. Using "biofuels" present in human organic liquids has long been a promising avenue.

Scientists from CNRS/Université Grenoble Alpes who specialize in bioelectrochemistry collaborated with an American team from the University of San Diego in California comprising experts in nanomachines, biosensors, and nanobioelectronics. Together, they developed a flexible conductive material consisting of carbon nanotubes, crosslinked polymers, and enzymes joined by stretchable connectors that are directly printed onto the material through screen-printing.

The biofuel cell, which follows deformations in the skin, produces electrical energy through the reduction of oxygen and the oxidation of the lactate present in perspiration. Once applied to the arm, it uses a voltage booster to continuously power an LED. It is relatively simple and inexpensive to produce, with the primary cost being the production of the enzymes that transform the compounds found in sweat. The researchers are now seeking to amplify the voltage provided by the biofuel cell in order to power larger portable devices.

As one of the most special members in the energy family, biofuel cell is a kind of real green battery. Using organic matter as fuel and enzyme as catalyst directly or indirectly, the energy conversion rate is theoretically quite high. At present, however, the inactive parts of biological cell membranes or enzyme proteins present great resistance to electron transfer, which in turn affects the efficiency of the entire battery. That is the inevitable hurdle that needs to be overcome in order to develop a viable biofuel cell.