A research team at Texas A&M University thought of incorporating carbon nanotubes into the electrodes of lithium metal batteries to achieve higher and safer charging.

This research was conducted at the College of Engineering at Texas A&M University. The focus of the research is on the battery architecture with great potential. When a traditional lithium-ion battery is charged and discharged, lithium ions move back and forth between the cathode and anode; the latter usually made of a mixture of graphite and copper. 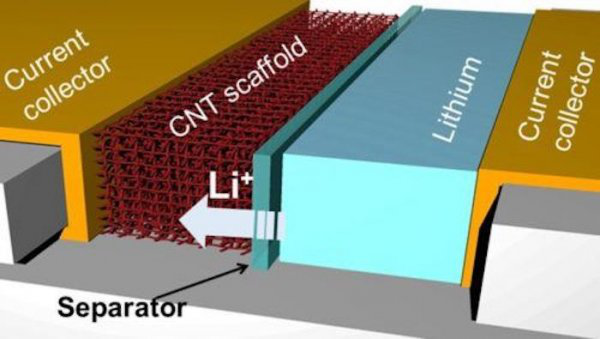 The research team found that using pure lithium metal may be a better choice. It not only provides a high energy density (the capacity is up to ten times that of ordinary lithium-ion batteries) but also makes the charging process faster and safer.

In fact, in a study last year, lithium metal anodes have been described as a key, “to breaking the energy density bottleneck of the current lithium-ion chemical reaction.” But researchers encountered a problem in the dendrites that form.

Due to the uneven distribution of lithium ions, these tree-like structures will accumulate on the anode surface. As the dendrites grow, they may pierce the battery cell, causing the battery to lose energy quickly or even short-circuit and catch fire.

The good news is that the research team at Texas A&M University has found an ultra-light and highly conductive carbon nanotube solution. Its design is similar to another 2018 study, which used carbon nanotube films to inhibit the growth of dendrites. 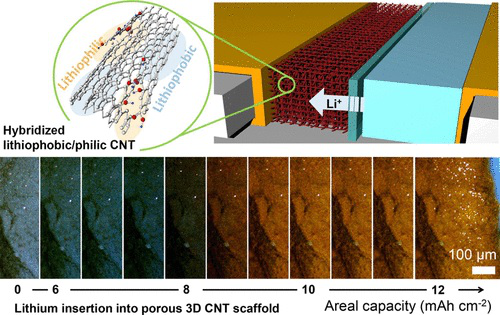 On the anode of a lithium metal battery, the research team used carbon nanotubes to construct a three-dimensional porous scaffold with molecules that can bind with lithium ions.

Through a series of experiments to confirm the concentration of molecular binding, the research team finalized a new battery anode that can avoid the accumulation of dendrites on its surface.

Researcher Juran Noh said, “ With the right amount of binding molecules, we can ‘decompress’ the carbon nanotube scaffold at certain locations, allowing lithium ions to pass through and bind to the entire surface of the scaffold instead of accumulating on the outside.”

Thanks to this uniform and safe distribution, lithium metal batteries can carry a larger and safer current (the anode current is five times that of traditional lithium batteries). Not only will it have higher energy density but it will also complete charging in a short period of time.

If you are interested in our battery products, please don't hesitate to contact us at any time!