According to Benchmark Mineral Intelligence, lithium prices have risen more than 480% last year. Musk said in a personal social media post that Tesla may directly enter the field of lithium mining and refining on a large scale because as a key element in the manufacture of batteries, the price of lithium has reached "crazy" levels. 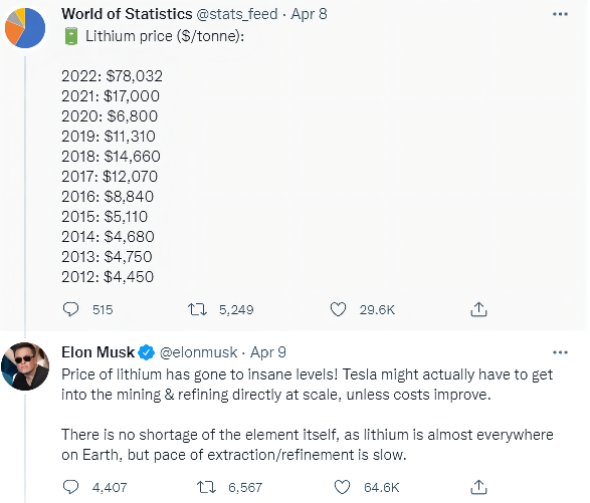 “Price of lithium has gone to insane levels! Tesla might actually have to get into the mining & refining directly at scale, unless costs improve. ” Elon Musk wrote on Twitter, "There is no shortage of the element itself, as lithium is almost everywhere on Earth, but pace of extraction/refinement is slow."

Back in September 2020, Tesla already signed an agreement with Australian lithium miner Piedmont Lithium, which will supply Tesla with high-purity lithium ore through its No. 6 lithium pyroxene concentrate in North Carolina, U.S., for five years (with a possible five-year extension for a total of 10 years), providing Tesla with more than 50,000 tons of lithium pyroxene concentrate over 5 years. In addition, a new lithium hydroxide refinery has been built at Tesla's Austin mega-factory to convert lithium pyroxene into lithium hydroxide, the raw material needed to produce batteries, and will be operational by the end of 2022 with an annual capacity of 8,000 tons/year of lithium hydroxide. On the other hand, Piedmont Lithium also said Tesla may buy more lithium ore, and other lithium pyroxenes may come from Australia or even Brazil. 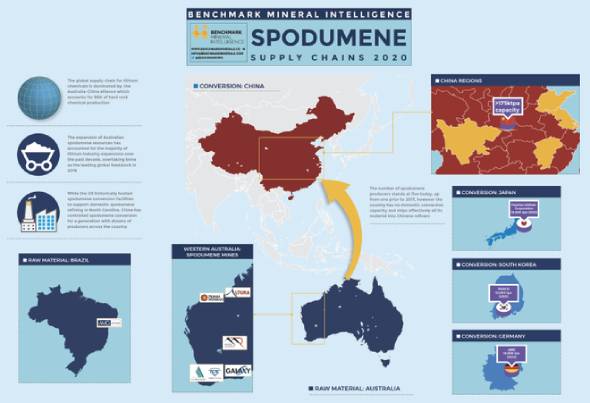 Lithium pyroxene is usually produced in Australia and refined in China, and the upcoming Tesla refinery will be the first lithium hydroxide refinery in the United States. In other words, it will compete with lithium hydroxide production in China. Lithium feedstock is the foundation of the 21st century, and a shift has already begun in the China-dominated lithium-ion battery and electric vehicle supply chain. Tesla is the first automotive OEM to enter lithium production, allowing Tesla not only to control costs in the supply chain but to once again see the trade flow of lithium pyroxene point to the U.S. rather than China. For the past generation, China has dominated the lithium pyroxene market through giants like Tianqi Lithium and Ganfeng Lithium. Again, this will send a warning to nickel. 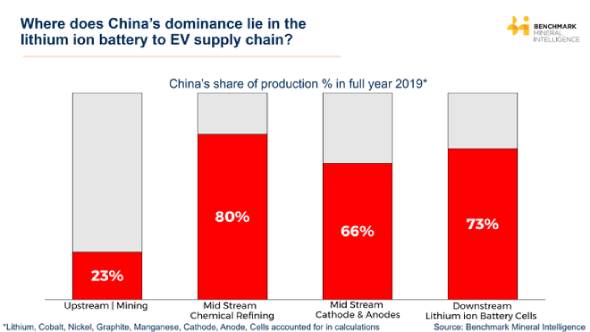 The upcoming refinery will convert hard rock lithium pyroxene ore into lithium hydroxide, which will be used directly in batteries. Tesla also intends to use a new method of producing lithium hydroxide using a wet metallurgical process that replaces sulfuric acid. Although this new process could reduce lithium costs by 33 percent, according to Drew Baglino, Tesla's senior vice president of powertrain and energy engineering, it still hasn't reached a commercial scale. In other words, Tesla still faces a new technical challenge.

Once Tesla has the ability to consistently produce the lithium hydroxide needed for its batteries while scaling up production, it will greatly enhance its ability to negotiate future lithium hydroxide contracts in the market. Tesla has clearly realized that it cannot rely on companies upstream in the supply chain or investors to rapidly expand to meet its needs. Now that Tesla has taken over some of the responsibilities of miners and chemical manufacturers, once Tesla has mastered the lithium refining process, production will scale up further, and growth is expected to be rapid beyond 2022.

As Tesla enters the upper reaches of the lithium-ion battery supply chain in its corporate transformation phase, Tesla is not trying to become a lithium miner; after all, its expertise and corporate culture are completely different from that of a chemical refiner. Tesla's lithium hydroxide refinery will allow Tesla to closely monitor the cost and quality of battery components, as controlling the cost of advanced materials in the electric vehicle supply chain is an increasingly unmissable way to lower battery prices.

With global supply chain conditions deteriorating and automakers struggling to obtain battery materials, it would be very encouraging if Tesla could accomplish all of this in a timely manner. Judging from the current soaring prices of lithium ore, Tesla is likely to go down and "mine" it itself. Tesla's efforts to move upstream could be replicated by other automakers and other areas of the supply chain.