Engineers in the US have developed a resilient, anode-free sodium battery that they believe could challenge the dominance of lithium-ion batteries, Eurekamagazine.co.uk reports.

Sodium is cheaper and more widely available than lithium and can match it for energy density when used in batteries. Replacing lithium with sodium and removing the anode has been attempted in the lab before, but anode-free batteries tend to form dendrites, tentacle-like structures of ions that impede performance and can lead to battery failure. This new research, carried out at The Washington University in St Louis, looks to have overcome this fundamental issue.

"But the problem has been, with this well-known chemistry, no one ever showed this anode-free battery can have a reasonable lifetime. They always fail very quickly or have a very low capacity or require special processing of the current collector." 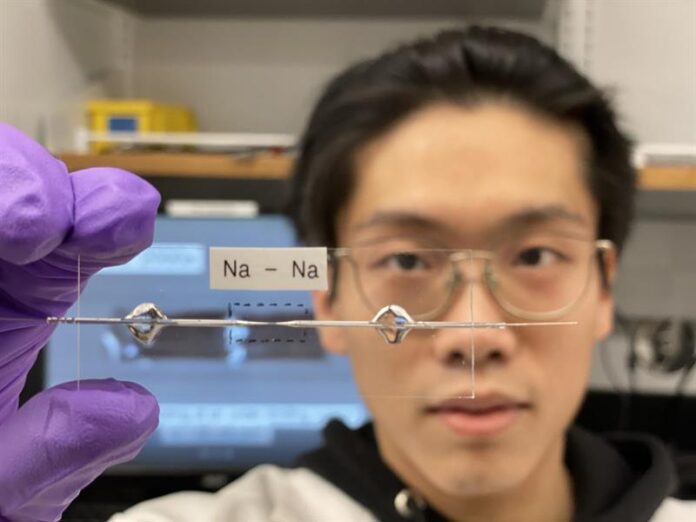 Bai and his colleagues experimented with using no active anode material, instead using only a thin layer of copper foil on the anode side as the current collector. Rather than flowing to an anode where they remain until moving back to the cathode, the sodium ions are transformed into a metal, plating themselves onto the copper foil. During discharge, the sodium dissolves away from the copper foil before returning to the cathode. According to the team, as the sodium builds up around the foil, it is smooth with a metal sheen and forms no dendrites.

"In our discovery, there are no dendrites, no finger-like structures," said Bingyuan Ma, a doctoral student in Bai's lab and first author of the paper, which is published in Advanced Science. "This kind of growth mode has never been observed for this kind of alkali metal."

By eliminating the need for an active anode material, the size of batteries could also be reduced, but without reducing their capacity. With high-density batteries an ever-increasing part of our daily lives, smaller, lighter, cheaper units that can match the performance of lithium-ion would have huge potential.

"Check your cell phone. Your electric car. One quarter of the cost of such items comes from the battery," Bai said.

"We've found that the minimal is maximum. No anode is the best anode."