Have you seen a drone that can withstand powerful gusts of wind? Caltech researchers have used deep neural networks to make drones not afraid of the wind. 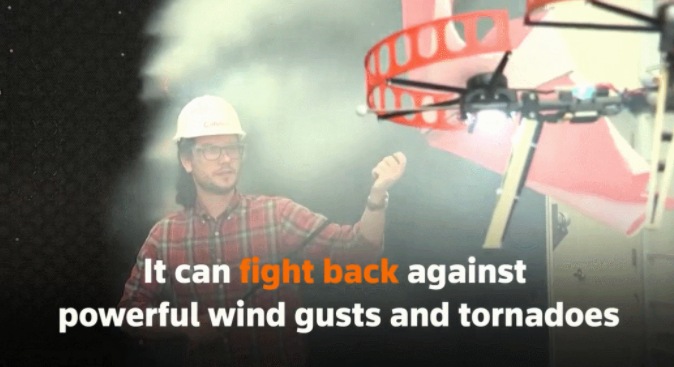 Flying against the wind is part of aerial flight. On a large level, wind speeds can pose a challenge to pilots when they land their aircraft; on a smaller level, breezes can also affect the flight status of drones.

As it stands, drones either fly under controlled conditions with no wind or are operated by humans using remote controls. Drones are controlled by researchers to fly in formation in the open sky, but these flights are usually conducted under ideal conditions and circumstances. However, for drones to autonomously perform necessary but routine tasks, such as delivering packages, drones must be able to adapt to wind conditions in real time.

To give drones better maneuverability when flying in the wind, a group of engineers from Caltech has developed Neural-Fly, which is a deep neural network, and an artificial intelligence tool that allows drones to stay agile in windy conditions by simply updating some key parameters to help them react to new and unknown wind conditions in real time.

The following shows a quadrotor UAV that can perform figure-of-eight shuttle operations in winds of up to 27 mph with the help of tools developed by the study. 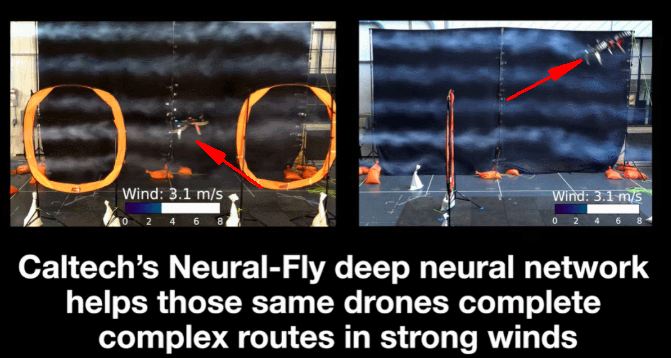 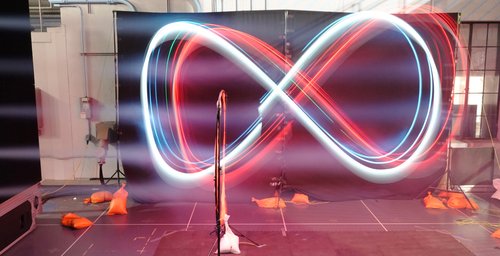 Data is essential in order for a drone to be able to navigate through a variety of wind speeds, and this study required not much data. After obtaining just 12 minutes of flight data, the Neural-Fly-equipped autonomous quadrotor drone learned how to respond to strong winds.

The study was published on Wednesday in the journal Science Robotics.

In the Neural-Fly experimental training, the drone flew in a wind tunnel with six different wind speeds, the fastest being 13.4 mph. 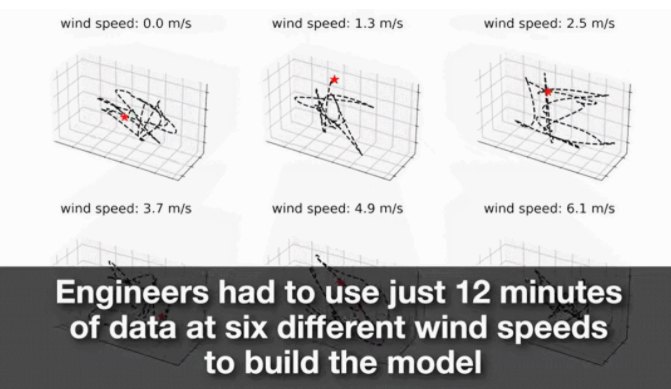 Based on this data, the team created a deep neural network that then allowed the aircraft to skillfully move through the same wind tunnel, for example flying in a figure-of-eight pattern or through two oval gates. The drones were much faster in the test than in training: about 27 miles per hour. That's the maximum wind speed the wind tunnel can generate, pointed out Guangya Shi, an author of the paper and a graduate student at Caltech. In addition to requiring only a small amount of data, the software operates exclusively on the Raspberry Pi, an inexpensive computing device.

Soon-Jo Chung, a professor of aerospace, control and dynamical systems at Caltech and corresponding author, said the new system has an error rate that is 2.5 to 4 times better than the existing SOTA technology for flight performance.

Pictured below, from left to right, are Guangya Shi, Soon-Jo Chung and Michael O'Connell. It is worth congratulating Shi, who will join the Robotics Institute at Carnegie Mellon University's School of Computer Science as an assistant professor in September 2023. 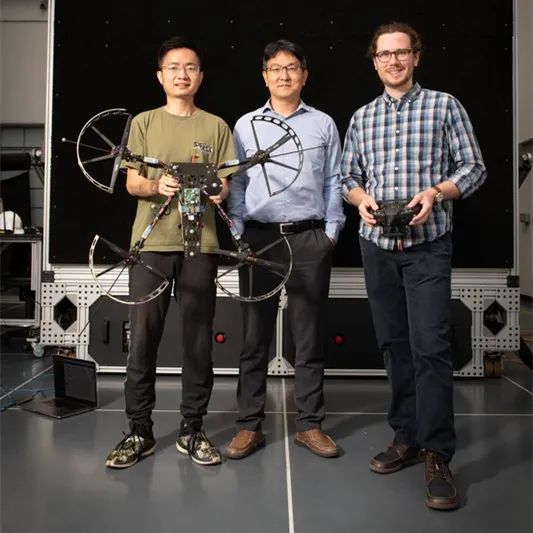 The researchers say the technology will be used in the future for drone delivery or aerial taxi.

Unmanned Aerial Vehicles (UAVs) are critical to performing safe and precise flights in dynamic high speed winds if they are to achieve sustained commercialization. However, designing efficient controllers using conventional approaches is challenging because different wind conditions and their effects on UAV maneuverability have not been thoroughly studied. 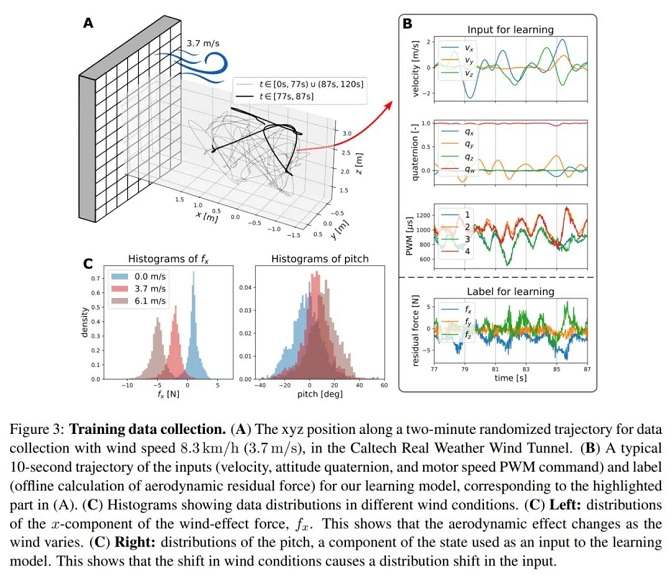 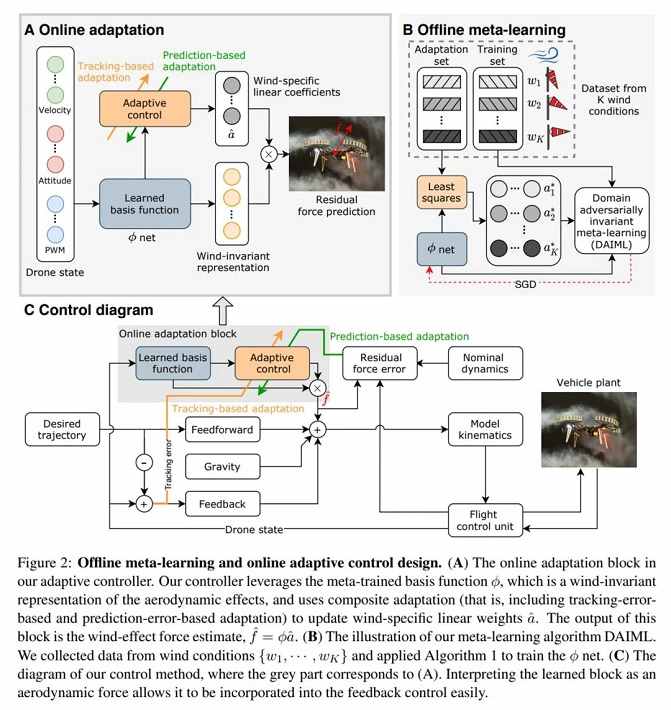 DAIML is also data efficient, using only a total of 12 minutes of flight data in six different wind conditions to train the deep neural network. DAIML includes several key features that not only improve data efficiency, but also can be informed by downstream online adaptive control stages.

Notably, DAIML uses spectral normalization to control the Lipschitz property of DNNs to improve generalization to unseen data and to provide closed-loop stability and robustness.

For the online adaptive control phase, the researcher developed a regularized composite adaptive control rule, which is based on a rigorous theoretical backup derived from a fundamental understanding of how learned content interacts with closed-loop control systems.

Specifically, the self-adaptive rule uses a combination of a position tracking error term and an aerodynamic prediction error term to update the linear coefficients associated with the wind. This approach effectively ensures stability and fast adaptation to any wind condition as well as robustness to imperfect learning. Although this adaptive control law can be used with many learned models, the exact representation learned from DAIML helps to further improve the speed of adaptation.

In terms of Neural-Fly's effectiveness, it delivers an average improvement of 66% over nonlinear tracking controllers, 42% over L_1 adaptive controllers, and 35% over incremental nonlinear dynamic inversion (INDI) controllers. All of these results were accomplished using standard quadcopter UAV hardware while running the PX4's default modulated attitude control.

Neural-Fly's tracking performance is competitive even when compared to efforts related to the absence of external wind interference and the use of more complex hardware, such as on-board optical sensors that require 10x the control frequency and use DC motor speed feedback.

The researchers compared Neural-Fly with two variants, Neural-Fly-Transfer and Neural-Fly-Constant, in which NF-Transfer uses data learned from training on different drones, while NF-Constant uses only adaptive control laws with a trivial non-learning basis.

Neural-Fly-Transfer shows robustness to UAV configuration changes and model mismatches, and the NF-Constant, L_1, and INDI methods all adapt directly to unknown dynamics without assuming the underlying physical structure, and they have similar performance.

Finally, the researchers demonstrated that Neural-Fly can perform a range of functions that allow drones to follow trajectories agilely through low-altitude gates in gusty wind conditions. 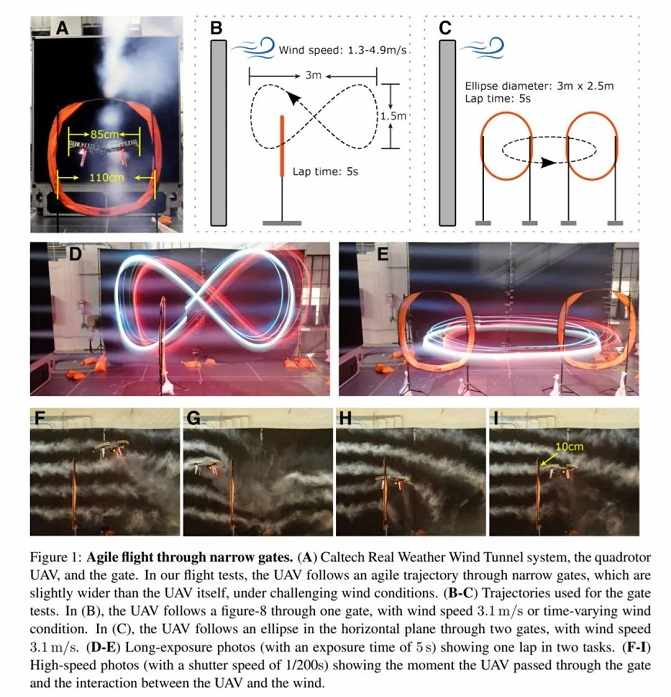